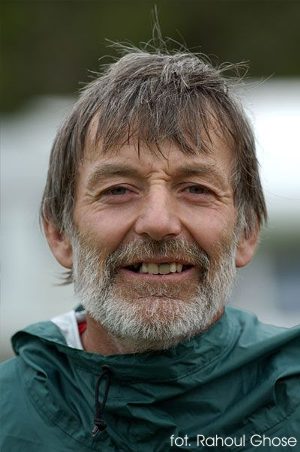 [b]napieraj.pl: Nowadays you are unquestionable AR guru. Who did you admire when
making your first steps in AR/on your beginnings? Did you have somebody to follow or did you work up your AR attitude all alone?[/b]

John Howard: I did not really have any roles in AR as it was a very new sport. I came from a climbing background so I looked up to people like Reinhold Messner. The very first Raid Gauloises was in NZ and at the start of the race we had no idea what we were in for, or what we would feel like after 8 days of racing.

We all, my wife and two children, still live in two buses and also an equipment shed. We are on a very small farm with sheep and one horse overlooking Christchurch.

[b]You took part in many races all over the world, with different team
mates. Most of this races you won or was in first third. How? What is
your “success recipe”? How did you achieve this? What gave you such an
advantage over others? [/b]

From the start I was able to race with people I liked who I knew where committed to doing well. The 1st race I did with Ian Adamson and Robert Nagle was really a training exercise for them. I think they recruited me to instruct them on how to race. One of the things they learnt from me was that to do well you have to be thinking constantly about to how improve your efficiency and how to conserve your energy. Also to look at the big picture of a race and achieve a strategy for being in a good position at the end of the race.

[b]What do you asses to be your biggest AR success? What do you find to
be your failure?[/b]

I think the Raid in Ecuador was probably the hardest and most satisfying race to win for me. The last Eco-Challenge that I competed in held in Borneo was my biggest failure. I pulled out when in 3rd place.

[b]You are said to be a “live GPS unit”, you are always making the right
decisions concerning route guidance. Did it take a lot of time to learn
navigation? How did you learn?[/b]

I was using maps for hiking and climbing from the age of 13 so I had a lot of experience. I was know for being able to feel and understand the terrain that many of the races took place in.

[b]What was your favourite food while “on the race”?[/b]

The best piece of food that I remember well was a chicken leg that I was given by some native Borneo tribe people. It was just delicious and was wrapped up in banana leaves so we didn’t even have plastic wrappers to take out.

[b]Many times, after passing the finish line you claimed going on
retirement, that it had been your last race. When did you make up your
mind eventually? Why? Don’t you regret? Which AR was our last one?[/b]

After the disappointment of the Eco- Challenge in Malaysia I felt I had lost the motivation to race and also I got offered work in China Working on the Mild seven Outdoor Quest. After that I was fully occupied working on races. I look at the people racing now and I am amazed that I kept racing for so long. It really hurts to win all those races.

[b]What are you occupied with these days? What are your future plans?[/b]

I am still cleaning windows and working on a few races. I had a course design role in last years Primal Quest. I would like to work on one or two races ever year. I was working on up to 5 races a year which was much too much.

[b]How did your training look like? Do you still train and participate
in competitions?[/b]

I was working as a window cleaner and then would often come home and have a quick power sleep of 30minutes then go out training. Anywhere from 1 to 3 hours an then occasionally have a 12hour day in the weekends. My physical work was almost part of the training.

I feel all the racing I have done has only been beneficial for my heath.

[b]What happened to your bikes on Raid Gauloises in 2000? Why did you
have to buy some in the local village?[/b]

Our support crew was held up and wasn’t at the TA when we arrived so we hired local bikes to keep going.

[b] What do you think about AR nowadays?[/b]

Most of the races nowadays are getting more sensible in that there is more sleeping time which I think is a good thing but I feel some of the difficult navigation that we had to do maybe lacking.

[b]What went wrong on Eco-Challenge 2000 in Malaysia? Had you been
forced to withdraw from a race, any time earlier that event?[/b]

The Eco-Challenge 2000 in Malaysia was the very first race that I withdrew from. The reason was that my feet were just too painful with blister and infections. This occurred when I kept my shoes on during the two days of sailing native boats at the start of the race. Normally I would have been bare foot in the boats but one of my team had stood on some very nasty sea spines and this influenced my decision to keep my shoes on. My feet became very soft and then when the trekking started became blistered quicker than normal.

[b]What would you advise to AR beginners?[/b]

Work more on your techniques and skills rather than your fitness.

[b]AR World Championship in Scotland are approaching. Who do you stake
on? Who are your favorites?[/b]

Obviously a New Team winning would make me happy but probably unlikely. I think the Nike team will probably be favorites and the open nature ot the country should help their style of racing.

Thank you very much for this interview!